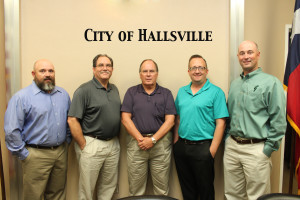 Mr. Herrington is a long time East Texas resident who moved his family to Hallsville in 2005. He has been a banker for 15+ years, and he currently serves as Senior Vice President at Guaranty Bank & Trust in Hallsville. He is married to Lori Herrington, and they have 3 children, daughter Nichole, an sons Stefan and David. Dan is an active community member. He is a member of Longview AMBUC’s for 10+ years, and he is a Praise & Worship Leader at First United Methodist Church in Hallsville. He enjoys sailing, youth sports, and music. He plays at local venues with his bands, Anchor Down and Leap of Faith. Mr. Herrington was elected to the City Council in 2015.

Mr. Hunt has been a resident of Hallsville since 2008. He is a Senior Chemical Engineer at Eastman Chemical in Longview. He has been married to Laura Hunt for 33 years, and they have four children and one grandchild. Charlie is active in the community as a Rotarian and a Lion’s Club member. As a Rotarian, he organizes the Longview ISD backpack program, which serves over 400 children weekly. He has served as a Baptist Deacon since 1994. Charlie served as a Hallsville ISD Trustee prior to being elected to the Hallsville Alderman position in 2015.

Duties of the city council include: